Kristen had the chance to meet Slider the Cleveland Indians Baseball team mascot as well as Whammer-The Cleveland Cavaliers Basketball Team mascot along with the Cav's cheerleaders. Below are some pics.

The Cleveland sports teams were tremendous in supporting us and making Kristen's final months very special. I would especially like to thank the Cleveland Indians (thanks also to Maria in the box office)for exchanging my tickets for a handicapped seat so Kristen could go to see a game and also Slider and the Akron Canton Indians for visiting Kristen in the Hospital. I would also like to thank the players and wives who worked so hard to contribute to Make A Wish Corporation. It is through people like them that we were able to go on our trip to Disney World. 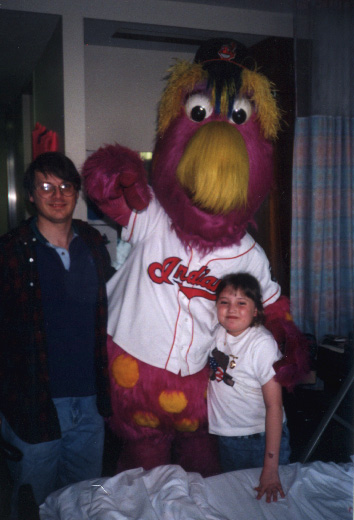 Slider-The Cleveland Indians Baseball Team Mascot visiting Kristen at the Cleveland Clinic in January! Something she talked about for months afterwards! 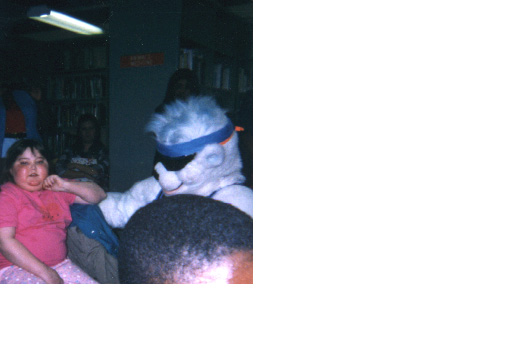 Kristen with Whammer the Cleveland Cavalier's Basketball Team Mascot. Whammer gave Kristen a very cool Cav's Tshirt at a most needed time when her clothes wouldn't fit her because of the weight gain from the steroids. This was taken at a promotional reading event at the Cleveland Library.

And below one of my most treasured shots is Kristen with the Cleveland Cavalier Cheerleaders...they took a few minutes to stop and pose for a shot with Kristen. Thanks Ladies! 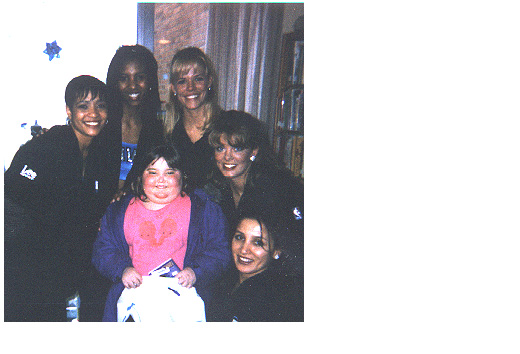 Go back to Kristen's Page